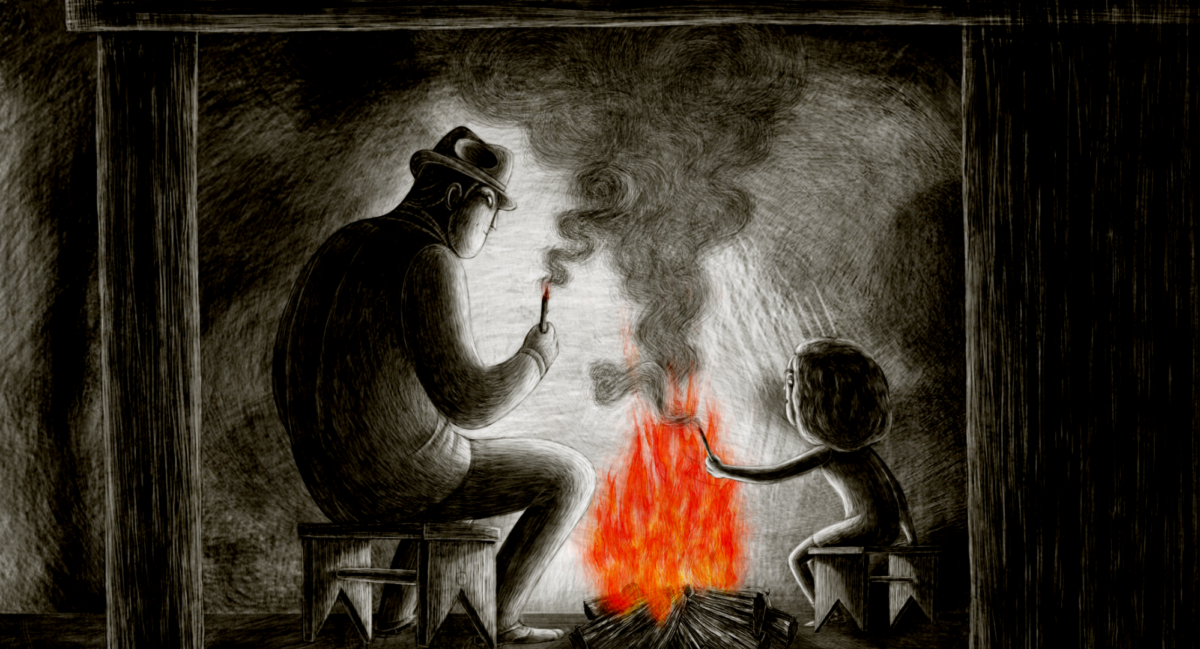 From 13 years old, where most of the stories presented are portuguese spoken with english subtitles. Children from this age will be able to appreciate a beautiful foreign language while following the movies with the english subtitles therefore welcoming teenagers from all cultures and speaking languages.

It’s like soot that rests on the walls of our head. We can’t see it. It belongs there already. After all the time that it was left behind, one question remains: “Why didn’t the trains stop there?”.

Winner of the Best Animation at the Brooklyn Film Festival 2016. In this story we are guided through the relationship of Amélia and Duarte, two people that felt out of love and are trying to cope with the feelings that come after a relationship has ended. They try to divide, destroy and erase the memories of each other.

An award-winning animated documentary, made using a recorded conversation (that is, not acted, not rehearsed, not scripted) between a mother, Joana, and her three-year-old daughter, Alice, who is recovering from kidney cancer. They both talk – openly and frankly – about the illness, their present circumstances, struggles and successes. The little girl’s speech served as an inspiration for very diversified visual styles, giving a precise feeling to the child’s interpretation of what that period was. “Surpresa” received several Awards & Distinctions and was played at many film festivals.

It is a personal story that enhances the family bonds, using the director´s sketchbook drawings as a reference and as the directors family as the subject.

From Regina’s personal and visual memories, a tribute to her uncle Thomas, a humble man with a simple and anonymous life. This is her acknowledgment how one does not have to be somebody to become exceptional in our life. The acclaimed film won a Jury Prize at the Annecy International Animated Film Festival (2019) and won the Annie Award for Best Animated Short Subject (2020).

Final Call is a love story about Catarina (who is a cat) who bumps into her old flame and might-have-been lover Diogo (who is a dog) at airport security. During a very awkward conversation, and constantly interrupted by airport security staff and procedures, Catarina and Diogo realise they made a big mistake due to a misunderstanding.